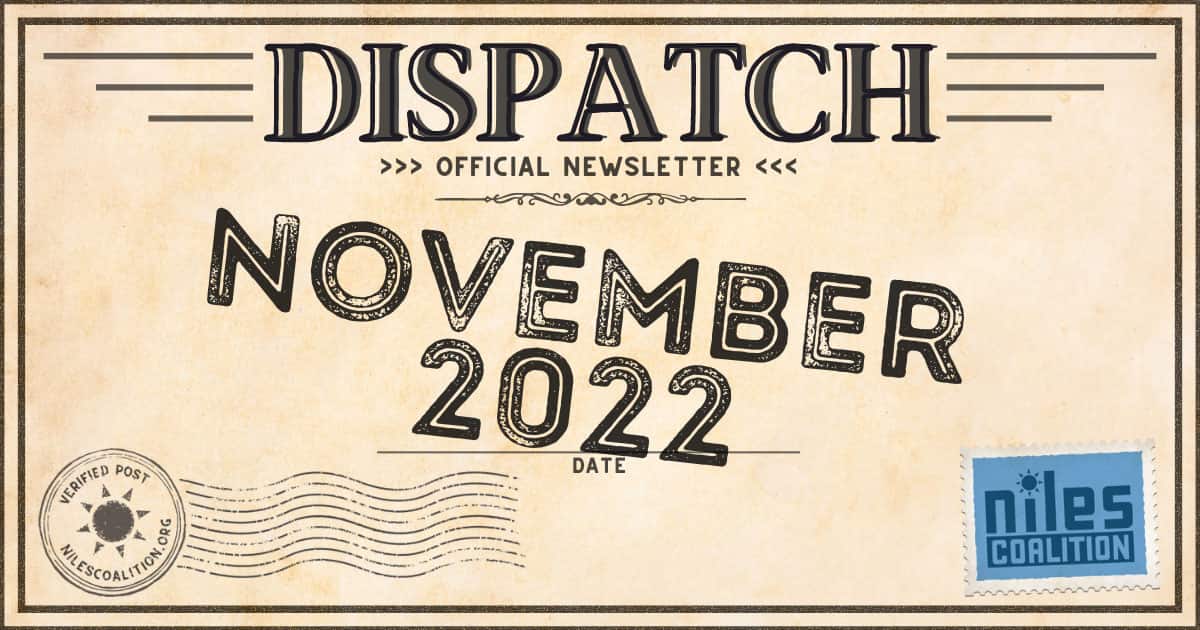 ::Community organizations like Niles Coalition fight for social justice. Meanwhile, right-wing forces are encroaching upon our communities. They are spreading misinformation in the guise of “zombie” newspapers. While many saw right through this and voted accordingly in the most recent election, these papers are agitating local bigots. When the Lincolnwood library was under attack, we showed up. In October they came out in bigger numbers. This is a trend we are watching and steeling ourselves to fight. Library solidarity!

::Closer to home we saw a pride flag stolen and vandalized in one of our neighborhoods in Niles. Neighbors have expressed support, and returned the damaged flag after it was found. We will continue to make it clear that we’re united against those sorts of attacks on members of the community.

::We’re happy to report that the Skokie Alliance for Electoral Reform won ALL THREE of their referenda in the recent election! We were early supporters of this effort and were proud to endorse this fight back in April 2022. The out-of-touch Skokie Caucus Party threw everything they had at them to maintain their firm grip of control. They were no match for the diligent organizers of Skokie Alliance for Electoral Reform. Congrats to those AMAZING people!

::Since day zero of our #SaveNilesLibrary campaign we knew the next library board election would be a crucial fight. A lot of our work went towards creating a supportive environment to uplift appropriate candidates. A new political action committee (PAC) has been formed called the Committee to Save Niles-Maine District Library. We know and support these folks who will support the candidates necessary to #SaveNilesLibrary!

We’ve given our SaveNilesLibrary.org web address to the PAC. So now when you visit that url it will go directly to their site where you can learn more about supported candidates, donate much-needed funds, and volunteer!

Candidates endorsed by the PAC will officially announce their campaign for the library board TONIGHT! Come meet the candidates, hear about their vision, and show your support for the campaign.

You can continue to find information about Niles Coalition’s #SaveNilesLibrary campaign on our website at nilescoalition.org under the Campaigns menu.

::In October some of our organizers attended the library’s Not So Haunted Open House. We passed out these fliers to spread awareness of this threat to Niles-Maine District Library. We had a blast connecting with hundreds of other attendees who share a love of the library.

::Niles Coalition organizers attended the recent Community Relations Commission (CRC) meeting. We asked that the Commission as well as all other committees in the Village make their meetings more accessible. We suggested a number of improvements. There is ongoing confusion among the commissioners whether the Village will allow the CRC to be what its mission suggests it should be.

::The mayor announced another new political party with a slate of candidates running for the Village of Niles Board of Trustees. We haven’t heard about their platform yet. In neighboring Park Ridge, the League of Women Voters conducted a study on why so few people run for office in the Park Ridge City Council: Rarely Running . If you’re considering running for local office and would like help connecting with like-minded folks please reach out to us at https://www.nilescoalition.org/contact/

::Thank you for all your support. Whether it’s fighting to save our public institutions (like the Niles-Maine District Library) or defending the existence of our own community members, we know there is a rich history of successful solutions of the past and present. We are hoping our experiment here in Niles will create the community we all deserve.